Arrangements of Churches for liturgy

(this page and this web-site are under development) The various elements of church architecture and furnishings interrelate according to one model or several arrangements, as I have discerned in churches and in documents about church architecture. 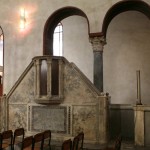 I have named only one model, because the discussion on only this one arrangement is comprehensive of all the different characteristics and dimensions of architecture for liturgy. I call this the Ritual Model. Its three primary characteristics are the font – ambo – altar. It has three axes: the axis of a double procession, the axis of the resurrection and the axis of sharing in divine life. It includes the dimension of the presidential chair. 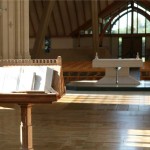 The two-part structure of Mass establishes two places of liturgical action, the eucharistic liturgy at the altar and the liturgy of the word at the ambo and chairs. Thus, the place for the ambo and chairs is distinct from yet related to the place for the eucharistic banquet. This structure is similar to the Ritual Model, but does not include the font or baptistry, nor other dimensions such as the axis of sharing in divine life. Read more. 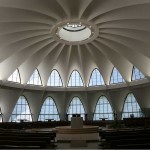 Standing around a central altar has a strong appeal for the participation and direct access of all participants in the liturgy. Its immediate appeal, however, gives rise to the difficulty of finding a place for the liturgy of the word and the ambo and developing an architectural expression of the axis of sharing in divine life. 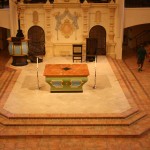 In the recent liturgical reform many churches were rennovated so that the altar might be brought closer to the people. This was often done by extending a large, raised platform for the altar, lectern and chair, which often required removing several of the  front pews to make room. Unfortunately, as the altar was brought closer to the people, its platform pushed people further away. In architectural terminology this platform is called a center-thrust stage. The ancient basilicas of Rome do not have a comparable center-thrust stage for their free-standing altars.

The major basilicas of Rome have free standing altars raised on a platform whose steps are so close to the altar as to provide access only for the ministers and only on one side. These basilicas such as St. Peter’s, St Paul’s and the Lateran, do not have a ‘sanctuary’ in the modern sense of the term because the altar stands free in on its own small platform, and the chair is placed in its own dignified setting. The lecterns are less developed since the ambos were dismantled around the 16th century.